Cobra Performing Arts, has taken New York and its neighboring states by storm. The programs provide opportunities that will promote leadership, teamwork, as well as physical fitness with a strong focus on character development. With a plethora of performances under our belt some of our most notable performances have been a part in the movie "The Birdman" with actor Michael Keaton, Edward Norton, and Emma Stone. It was countless long hours of filming in New York City's own Time Square but the reward was worth it. The Movie received 7 Golden Globe nominations and won Best Film of the Year at the 2015 Oscars. Another large project the band has worked with was the NFL. The band and its members showed the country it's talents in the pregame presentation in Times Square on Super Bowl Boulevard and the band also lead the

Vince Lombardi Trophy into the stadium at the 2014 Super Bowl. The Marching Drumline and Danceline has opportunities for all young people. We create memorable events for the individual but also for the collective membership. These events provide realistic experiences that empower band members to contribute to common goals at practice. Team building and learning music benefit the participants in both their school work and personal life. The long term benefits include enhanced communication skills, concentration, decision making, stress minimization and self confidence. 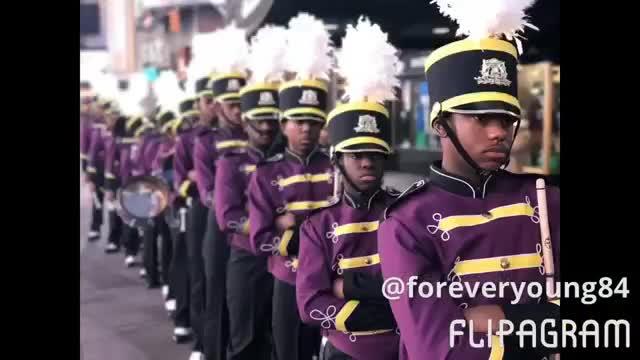 Terrel Stowers CEO of Cobra Performing Arts, and discuss ideas of how the show can impact millions of views and spectators from around the world. Terrel Stowers CEO said "We want to be able to show the world our talent, the show will 3min and 55secs of non stop action and entertainment from the Marching Cobras".

The program also addresses the escalating violence, gang presence, dropout rate, lack of positive male role models for and female role models and reduce the incidence of risk taking behaviors among this vulnerable population. The program also deals with a critical and often overlooked need in the minority community overweight and obesity. With a large minority population the need for intervention is critical to ensure the short-term and long-term of these youth. The Band program address this critical issue by a "Healthy Lifestyles and Transitions Program" as part of the Marching Cobra Program.

We pride ourselves on is the fact that there is no prerequisite for experience in our program. Many of our members were not drummers or dancers when they first entered. They heard about the program and their interest brought them to us. This is where we were able to really shape, mold, and work with anyone. Sure it is beneficial if an individual has the experience but it is not a requirement. If you show you will be dedicated and that you will put in the effort to learn your craft then it becomes easy. The best thing is watching an individual go from knowing very little to mastering their drum or their dance. Socially healthy and respectful bonds are formed. Shy individuals quickly come out of their shells and shine bright with the rest of the program. Every and anyone that is willing has a place in our program.